Jon Semple Reflects on his Career, Seven Years Since Joining the Pilot Programme

Whilst on placement with Admiral Group plc he secured a permanent role and has since worked his way up, achieving multiple promotions and vast experience including living in Spain, France and Italy as part of his roles.

Here he tells us more about his journey from starting the Graduate Programme to being appointed his current position as Admiral’s Group Operational Risk Manager.

I was a member of the pilot Welsh Financial Services Graduate Programme beginning in September 2013. I was given the opportunity to work in different departments in Atradius and Admiral. These placements included underwriting, customer contact strategy and risk departments.

One of the main things that initially attracted me to the scheme was the fact it offered great mix of theoretical and practical learning. This combination really worked for me, I finished with a distinction in my MSc and a permanent role with Admiral. 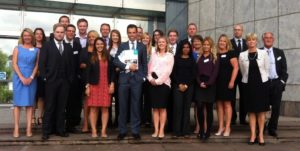 I’ve been very lucky since joining Admiral, I’ve worked with some amazing people, been given the management and experiences to develop and had the opportunity to live and work in lots of different countries.

After completing the Welsh Financial Services Graduate Programme in September 2015, I had a placement working in Paris, France. This was an amazing opportunity to work with a start-up business that was growing quickly. My best recommendation for Paris is La Lucha Libre, one Friday every month is a Mexican wrestling night, and it is one of the greatest nights out you will have.

After working in France, I spent time in Seville, Spain, where I again got to work with amazing people, in a new culture. Following this I spent the rest of 2016 working in the risk department in Admiral’s UK headquarters in Cardiff. Better understanding Group processes and expectations of the role.

From 2017 onwards I have been working abroad. In 2017 and early 2018 I lived and worked in Rome, Italy leading a “growing up Governance” project across the French, Spanish, and Italian insurance businesses. 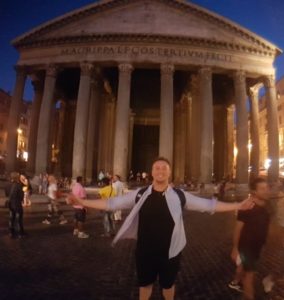 My career highlight so far, was working in Spain from early 2018 to the end of 2019. As a result of Brexit, and the lack of clarity of what this entailed Admiral created a new insurance entity in Spain that would allow Admiral to continue to passport insurance within the EU post-Brexit. This time my role involved supporting the creation of the entity and implementing the governance structures, committees and Board. Following the successful creation of the new insurer on 01 January 2019, I spent the year covering multiple governance roles helping with the first year of operations. Again, the best part of working in Spain was the people I worked with; the way Admiral has managed to spread its culture across different countries is impressive.

I would recommend working abroad to everyone who is given the opportunity. Being forced into new experiences is really good for our personal development, I think I “grew up” a lot.

The biggest challenges I faced were most definitely the new languages – I can barely speak English properly, so working in different countries with different languages was interesting, but the people I worked with always helped me out.

The focus of my new role as Group Operational Risk Manager, is to build a team that effectively supports Admiral’s subsidiaries in managing operational risks and providing consolidated reporting on risks to the Group Committees and Boards.

What did you have to do to get where you are today?

Working hard and asking for opportunities. My advice to anyone would be not to be afraid to ask for new opportunities, what’s the worst that will happen? – someone might say no.

Do you have any advice for someone who is thinking of applying for the Programme?

Wow, what a career Jon’s had since joining the programme – truly inspirational! Thanks for taking part Jon.